← From the Mixed-up Files of Mrs. Basil E. Frankweiler
Welcome! →

Diary of a Wimpy Kid Movie

Diary of a Wimp 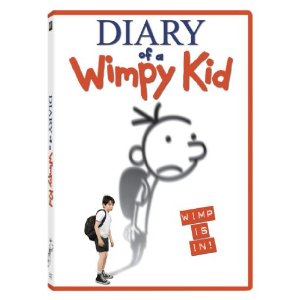 Plot: Based on the Diary of a Wimpy Kid Books by Jeff Kinney, “Wimpy Kid” and middle school student Greg Heffley and best friend Rowley find trouble easily.  Convinced he can and must become popular, Greg attempts various activities to achieve that goal.  Rowley does not help Greg much, as, it seems, at every turn, Rowley is behaving in a way that causes Greg extreme embarrassment.  After many failed attempts at popularity, a run in with some bullies, and much gross-out humor along the way, Greg comes to a realization about what really matters.  Hint: it’s not being popular.

Review: Tweens may enjoy the gross humor and antics of Greg and Rowley, adults may not.  The first half of the movie moved slowly and lacked a cohesive plot, but the second half picked up a bit and had more substance.  For fans of the Diary of a Wimpy Kid books, this movie brings to life some of the familiar scenes, and cleverly integrated line drawings.  But the clever, compelling nature of the books is not paralleled in the movie.

Series Information: Movie based on the first book of the Diary of a Wimpy Kid 5-book series by Jeff Kinney

Rodrick: Greg’s older brother who is intent on torturing Greg as much as possible