← How to Save the Planet by Barbara Taylor
Zora and Me by Victoria Bond and T. R. Simon → 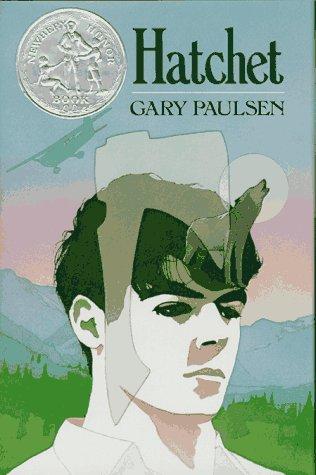 Plot: It’s the first summer since his parents’ divorce and Brian Robeson is going to spend it with his father in Canada.  Brian’s mother drove him to the small Hampton, New York airport where he would board a single engine plane to Canada, her parting gift to him, a hatchet to use “in the woods” with his father.  But,
Brian’s plane doesn’t reach its destination.  The pilot has a heart attack and Brian, the only other person on the plane, must take over flying it.  After intentionally crash landing by a lake, in order to inflict the least injury upon himself, Brian begins the task of surviving.  Can he find enough food to live?  Can he shelter himself from the dramatic storms that pass over this land?  Will he ever be rescued?  Brian must dig deep inside himself to find the answers.

Review: Gripping and exciting, Hatchet brings its readers on a tense and dramatic journey.   Though written in third person, the novel gives the reader the feel of being privy to the private thoughts of a young man desperately trying to survive in the wilderness.  Some of Brian’s knowledge is a little too convenient, he’s watched a nature special that provides him with just the exact information he needs, but otherwise the novel reads like a journal of a young man stranded in the wilderness, discovering not only whether or not he can survive, but who he really is.

Series Information: Hatchet is the first in a four-book series about Brian Robeson (see similar books above for titles)

Brian: Main character, 13-year-old visiting his father for the summer, his parents have recently divorced, has to survive by himself with very few resources, save the hatchet his mother gave him for the trip

Brian’s Mother: Left Brian’s father due to a secret that Brian knows but his father does not, gives Brian the hatchet that turns out to be a dramatically more useful gift than either of them could have imagined

Brian’s Father: Lives in Canada, a mechanical engineer who works in the oil fields.

2 Comments on “Hatchet by Gary Paulsen”